On March, 15th, 2016 the European Parliament Committee on Agriculture and Rural Development adopted by a large majority the report on the Commission’s proposal regarding the manufacture, placing on the market and use of medicated feed. The new rules, which will be implemented in the form of Regulation, will replace the current Council Directive 90/167/EEC of 26 March 1990. The new legislation falls under the Commission’s policy on human health and food safety together with the upcoming Regulation on veterinary medicinal products, which we discussed in our previous article. The Directive 90/167/EEC, having already been implemented for 25 years, even before the establishment of the single market, is now considered obsolete, due to advancements in science and changes in economic conditions.

The main issues concerning the implementation of the current legislation deal with discrepancies in the interpretation of the Directive in the national legal systems, which has led to barriers in the single European market, the lack of specific rules governing the manufacturing processes, labelling requirements of product packaging as well as the possibility of inadequate dosage of the required veterinary medicine.

After taking into consideration scientists and other stakeholders’ views and proposals, the European Commission argued that the new rules should inevitably be in accordance with the legislation on the veterinary medicines, as well as on food. According to the FEFAC’s (European Feed Manufacturers’ Federation) and the FVE’s (Federation of Veterinarians of Europe) view, the advantages of medicated feed outweigh other means of administering medicines to animals. Given that medicinal substances contained can be easier administrated and homogenously distributed through digestion, this method facilitates  medicine traceability as well as compliance assessment on the veterinary prescription and on the suggested duration of the treatment.

On the other hand, this method cannot contribute to the personalized care of the animals in need and is quite risky due to decreased appetite of sick animals. Additionally, there is a high risk of transferring active substances to other foodstuff.

The upcoming Regulation aims to regulate the manufacture, storage and transportation of medicated feed, its market distribution, import and export to third countries as well as limitations in their use. It should be noted that the Commission has suggested the scope extension of the legislation to pets besides food-producing animals. Moreover, FVE‘s representatives suggest the explicit inclusion of animals with other functions essential for humans such as leather production for clothing and footwear.

Taking into account that in science grounds, high manufacture standards are often linked to treatment quality, what the new rules make clear is that only veterinary medicinal products authorized for the purpose of the manufacture of medicated feed in accordance with the conditions laid down in Directive 2001/82/EC can be added to the feed. Furthermore, medicated feed can only be produced according to a veterinary prescription based on the diagnosis of the animals in need. Aiming at enhancing animal health, the Commission has suggested a defined prescription period as well as specific provisions for administering prescriptions. However, scientists believe that the continuous assessment of a sick animal’s disease should be additionally foreseen by the new legislation.

Furthermore, the new Regulation will impose specific rules on the liability of manufacturers of medicated feed as well as on the provisions of good manufacture practices with more emphasis given on product homogeneity and avoiding the unintended transfer of active substances to feed intended for other uses (e.g. maximum transfer limits), which is likely to happen when more kinds of food are produced in the same line.

A solid legal regime is also established for the approval of feed business operators.  The manufacturers shall be able to prove the implementation of technical rules laid down by the upcoming regulation and the Commission’s delegated acts.

In order to promote the traceability of medicated feed, the Commission institutes the obligation by manufacturers, distributors and veterinarians to keep records for  at least three years.

One of the Commission’s main concerns remains avoiding undue distortions of competition within the market of medicated feed, when the latter contains medicines that have been authorized in a different member state. To this end, the Commission has proposed a provision according to which, in case the Member State of manufacture of medicated feed is not the same as the Member State where it is used by the animal holder, the veterinary medicinal product shall be authorized in accordance with Directive 2001/82/EC in the Member State of use.

Last but not least, taking into great consideration the scientific announcements for antimicrobial resistance to antibiotics and the subsequent alarming consequences for public health, the Commission suggests the reduction of medicated feed with antimicrobial substances for food-producing animals and a ban on their use for preventive purposes or with purpose for enhancing the animals’ performance.

The new legislation aims to promote a level playing field throughout the European market which guarantees safety and effective use of medicated feed. We expect that the new rules will enhance the benefits of this method of medicine administration and reduce or eliminate existing dangers for animal and human public health. In our view, the European market is in need of a new, updated and harmonized legislation on manufacture, placing on the market and use of medicated feed, so that incidents of competition distortion will be eliminated and high safety standards for animal health and subsequent human health will be safeguarded. Given that the legislative text has already been adopted with amendments by the Committee on Agriculture and Rural Development, we now anticipate the negotiations with the Member States to finalize the text the Council vote.

Blow the whistle without fear: The importance of whistleblowers’ protection

Data Protection on the Web & E-Health 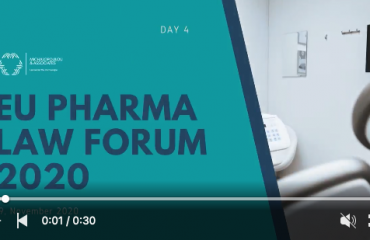